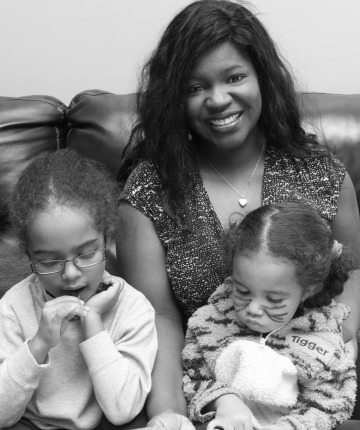 Bunmi Laditan is a mother, blogger, and the founder of a little gem known as, The Honest Toddler.

This unique blog and social media feed thrive on the ability to make parents laugh with the philosophies of a toddler mind by presenting playful antics and musings from a toddler’s perspective.

The concept was inspired by her youngest child, and has attracted a loyal following online. The Honest Toddler has gained a following of over 150,000 on Facebook and more than 260,000 followers on Twitter. Within the last year, Laditan published her book, Honest Toddler: A Child’s Guide to Parenting, and is currently planning to make a television series for The Honest Toddler.

Recently, the future of Honest Toddler has been challenged with trademark dispute by a company, which manufactures and sells eco-friendly products for babies and household care. The Honest Company, founded by actress and mother, Jessica Alba has initiated legal action against Honest Toddler for infringement on what they refer to as “the honest mark.”

Records show that Ms. Laditan filed for registration of the trademark “Honest Toddler” on September 27, 2012. A search of several databases showed the earliest trademark registration of the Honest Company to be November 13, 2012 in which they applied for trademarks for each class of their product line (even though the company launched in 2011). It is under these collective registries of “the honest mark” that The Honest Company is claiming “superiority rights” to the trademark. The Honest Co. also claims that they registered for the domain honesttoddler.com in March 2012 and The Honest Toddler registered for the domain thehonesttoddler.com in July 2012. Opposition to Honest Toddler’s trademark was filed in May 2013.

Upon launching in January 2011, The Honest Company received notice of a trademark infringement on behalf of HonestBaby, a small infant clothing manufacturer. HonestBaby applied for a trademark registration in 2008. At the time, The Honest Co. was in much of the same position it is trying to force upon The Honest Toddler, but the parties were able to come to an agreement.

In this case, Laditan felt it necessary to point out that the website belonging to the former owner of Honest Baby, which no longer exists—an option she is not willing to consider for The Honest Toddler.

In an attempt to reconcile with their target market, The Honest Co. released a statement to clarify their legal intentions. Many perceived the statement to be a form of back peddling and damage control after they realized the cost of alienating the shared target audience. Hours later, The Honest Company activated the reserved domain for their own toddler website to give further clarity to the circumstances.

Included in the Honest Company’s briefing, is a screenshot of a letter they received from Laditan stating that she would “see this battle through to the end.” She also communicated that she has received a lot of support in the matter from various blogging communities.

The Honest Company explained that Laditan went back on her verbal agreement, made false claims, and implied that she is being overly aggressive in the matter. There was certainly some obvious spice in the letter from Honest Toddler, but the Honest Co. seemed to present an equal amount through their new website, in my opinion. The Honest Company has stated that it plans to continue with legal action in order to protect and preserve its rights to potential endeavors under The Honest Toddler name.

At this point, The Honest Company is faced with a PR crisis. The Honest Co., must decide if they are willing to damage the reputation of the brand for the sake acquiring one more trademark. Even if the legalities settle in favor of the Honest Co., they will have alienated a large base of their target market. It would be a bold and risky move.

If you’d like to support the “little guy” in this dispute, you can purchase a copy of The Honest Toddler: A Child’s Guide to Parenting by clicking here.

An alumna of Baylor University, Kelly holds a bachelor's degree in Film & Digital Media. She currently serves as a contractor for YOakleyPR and is enrolled in a Graphic Design certificate program at Savannah College of Art & Design.